In general, human society is very recognisable.  Human attitudes are not much altered from the 21st Century – humankind still competes, double deals, acts bravely and honourably, or for greedy and base motives.

Most of the differences that have arisen over the last few hundred years arise out of the factors described below.  These apply to human society in general throughout the Universe.  Within this, there are very wide local variations of attitude and practice – especially in the outer colonies.

There are no concepts such as the fictional ‘Prime Directive’ from  the 20th century (old style date).  All polities will interfere with another culture or society so long as they think there is some benefit from it, and that they can get away with it.
There is a body of interstellar law, based on bilateral and multilateral treaties – and for the most part the main polities adhere to this – at least in public (much as in the 21st century (OSD)).

There is a system of monetary exchange.  The Interstellar Monetary Unit (IMU – known colloquially as the ‘credit’) has been around from several hundred years.  In addition, some of the minor colony worlds have operated their own currencies – where they have not been able to trade sufficiently to attract banking services from one of the Big Seven interstellar clearing banks.

Some nations do have internal currencies based on specific worlds – usually for historical reasons.  Most famous is Earth’s unwillingness to completely give up it’s ancient currency, the Dollar, and fully integrate with the IMU for domestic trading – arguing that such an integration would be giving up an important area of soveriegnty.

Most monetary exchanges are electronic, though again, units of exchange exist that are not linked to the PlanetNet or StarNet universal banking systems do exist where technology is in short supply.  Most common of these are handy portable CashChips(TM) – used widely in the outer colonies as verifiable monetary exchange unit backed by IMUs.

One of the common technologies of the Universe is the ability to genetically engineer the human form.

It is a matter of social fashion that these variations tend not to be too grotesque – those that can choose, i.e. the richer parts of society – choose offspring that are genetically perfect examples of humankind.  The ‘Perfects’ are healthy, strong, intelligent and good-looking (within small variations).  As a result, perfects form virtually the totality of all the areas of responsibility and leadership.  All the military are perfects, all government, industry and educationalists are perfects.

The remainder of the poorer part of the population tends to be made up of those with more natural genetic material.  The Naturals are prone to the usual range of human abilities – the best can equal the perfects, but might carry injurious recessive genes, but the majority are just not up to the standards of perfection.

On new colonial worlds, there tends to be a higher proportion of naturals, though perfects (or the natural descendants of perfects) still tend to lead and take important jobs.  The imperial or colonial powers have very high proportions of perfects.

Discrimination on the grounds of genetic makup is not only legal, it is required in some cases – for example naturals are not normally allowed to serve in the military, police or on the judiciary.  This discrimination is regarded as normal – in fact it is seen as reasonable – since unlike ‘race’ discrimination in ancient times on  Earth – the discrimated group is actually inferior (rather than merely inferior by virtue of the dominant social power structures).  Arguements that suggest that discrimination should end on the grounds that ‘all humans are equal’ fail in the light of verifiable biological fact.

The acceptance of the genetic status quo is so widespread that the subject is never even mentioned or considered by those in power – the naturals being, in effect, an invisible part of all human societies of the Universe.

There are small groups of natural activists, some resorting to direct action at times – but they have so far failed to get widespread support, even among the natural population.  Most well known of these groups is the feared  Democracy And Freedom Today group – which has been responsible for seemingly random acts of terrorism and mayhem throughout human space for many years.

Cyborging – or the ability to graft technological enhancements onto the human body has been around for some time.  Humanity as a whole tends to prefer to be perfect but human, rather than a mixture of human and machine (most people would rather have perfect eyesight than glasses).  It tends only to be the psychotic personality that chooses to, in effect, self-multiate by adding cyborg components to their bodies.

That said – there are those who choose to cyborg – even though it is more expensive and painful than gene-engineering – akin to the 21st century fashion of body-piercing.
It is also done by some naturals who wish to make a political point as well.

A drawback of the process is that the more cyborging that is done, the less human the cyborg becomes – cyborging has been shown to increase the incidence of psychotic behaviour.

Some worlds have made Cyborg operations illegal, due to the links between cyborgs and criminal activity.  Other worlds have embraced cyborging as a political creed, though generally one wonders about the political and social stability of such a system.

Humanity has no ‘races’.  There are many and diverse ethnic variations – some old some new.  The majority of humanity in the universe is from old earth mongolian-chinese stock, but the physical differences are not as easily defined as they were centuries ago due to various social upheavals and intercommunication.  There are minor physical differences that have arisen as a result of inbreeding on long isolated subsistence colonies – but on the whole the very concept of race is missing since it proved too difficult to define in any rational way.

If humanity were to encounter any non-human sentient, they would, of course, not be referred to as ‘alien races’ since that would be a biolognically meaningless term.  The proper designation is alien species.  Unless you can interbreed with them, in which case they would be, by definition, human and not alien.

There are, of course, absolutely no sentient alien species in the Universe.  100% totally not, none, not any.  Honest.

Religion In the Universe

Throughout it’s existence Mankind has remained in need of mystical, spiritual or ethical guidance. In the Universe, religions and non-religious ethical teachings pervade.
The mix of faiths vary widely from world to world – some colonies were founded by specific religious groupings, some by break-away offshoots of more established religions.  Few worlds are mono-cultural though – even if tolerance is not absolutely Universal.
Unfortunately there isn’t room here to go into a detailed analysis of the teachings or the demographics of these various faiths – that is for others to do in due course…

This table summarises the main religions of humanity, showing the Universe wide prevalence of their followers (pdf file)

In most polities there are also banned cults and religious groups, such as the recently established Exterminator Cult. 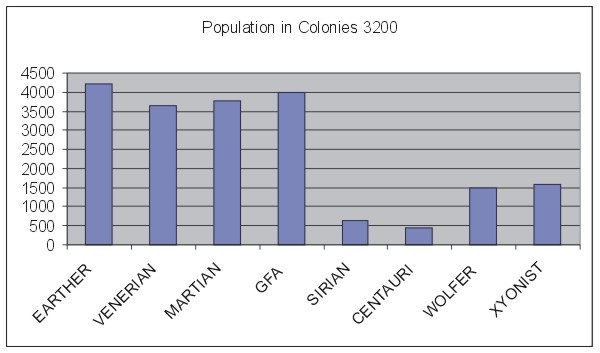 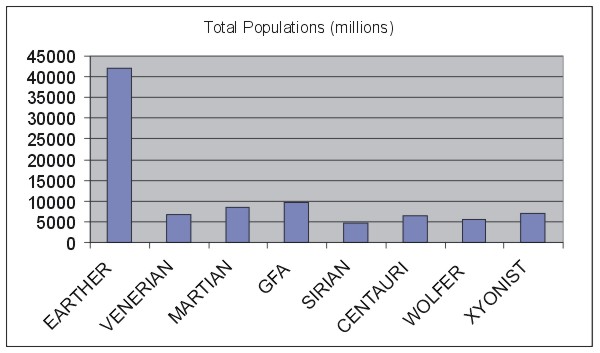