All dates in UC.

2574 Start of the Eighty Years War on Earth

2654 End of the Eighty Years War on Earth

2720 First permanent base on Old Mars

2779 Foundation of the Helix Corporation as part of an ambitious Old Mars terraforming project.

2831 Start of the Second Great Dark Age on Earth. Earth cuts off contact with space colonies.

2838 Nuclear bombardment of Washington, Peking and Bombay from space in the First Space War

2842 First ever ship to ship space battle around Rhea (Moon of Saturn) between rival expansion corporations.

2877 NASA settled by citizens of Europe and North America.

2879 WOLF 359 a debatably habitable world, was settled by a small team of pioneers from England (led by a charismatic member of the English Royal Family).

2881 SIRIUS A world of great potential was discovered and one-third was granted to the Martian Helix by the Solar Republic; the remaining two-thirds were reserved as a penal colony.

2882 Earther invasion of Mars. Mars adopted as a protectorate of the Solar Republic, but remained under the control of the Marian Helix.  STEELYARD (later renamed HIGH LAND) settled by Incorporated Space Traders of Japan and Luna.2885 CANAAN (the Church of the Seventh Coming and the Venerian Exodus;) the Church, and associated colonists of many types, accepting that the terraforming of Venus would take many more centuries, departed for a new world which they named ‘Promised Land’ or ‘Canaan’.  Colonies on the solar inner planets of Mercury and Venus controlled by the Church are abandoned.

2898 MIR was settled by people from Russia and Africa, with a presence by Incorporated Space Traders. 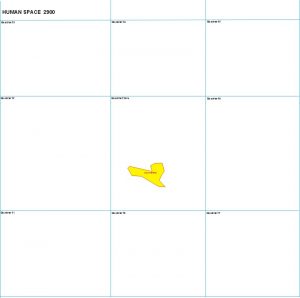 2916 AGAMA founded by religious settlers, with heavy backing from Earthers and the colony of High Land.  Mald School of Economics founded.

2920-24 New Edo colonised by a number of colonisation groups simultaneously.

2922-23 Wolfer Secessionist War. Solar Republic acquiesces to ‘independence’ for Wolf359 after a catastrophic space battle defeat.  The Estreham Protocol set out the relationship between the Republic and Wolf359 – under this Wolf technically remained part of the Solar Republic, but gained a certain degree of devolved government.  This quickly became de-facto independence.

2940-3 The Greater Secessionist War. Politically weakened, split by internal dissent, and shown to be weak in the Wolfer Secession – Solar Republic fails to control its rapidly expanding political sphere faced at the same time by considerable unrest on Earth – the republic starts to disintegrate.

2944 Earth-Mars War.  Old Mars attempts to secede from the Empire, supported by the fledgling Martain Union.  This failed, after considerable loss of life (mostly Martian).  It was in this war that the Hyama Dome Massacre occurred – a subject of controversy to this day.

2945 Treaty of Io confirmed Old Mars as a permanent part of the Empire.

2948 Martian diaspora reaches its height, as unhappy ‘Old Martians’ emigrated in large numbers to new colonies (including, but not exclusively, the new Martian Union). 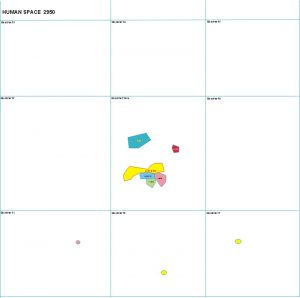 2950 The Treaty of Bates setting out the colonial administrative Quadrants and agreeing certain interstellar diplomatic protocols.

2957 The Alpha Centauri Company buys itself out of the Empire. Renamed and relaunched as the Centauri Conglomerate.

2961 Wolfers colonise Scott (Q5). Formation of the unofficial ‘Federation of Asteel’ within the MAFC.

2976 Asteel War of Independence (against the Martian Union).  Formation of the Greater Federation of Asteel.
Vulkan colony (Q0) destroyed by Mass Driving in the fighting.

2981 Mald Foundation recognised as an independent state by all major polities at the Congress of Europ.

2993 M’Drid III (Q7) rendered uninhabitable due to an ecological disaster.  World listed as off limits to colonists by interstellar Treaty of M’Drid, and a permanent orbital observation station set up as a neutral base to ensure it was never visited again. 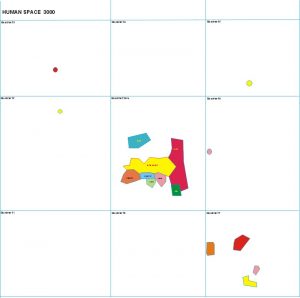 3010 Widespread forest fires in many remote areas of North American Continent on Earth Q0. Reportedly the worst in history. 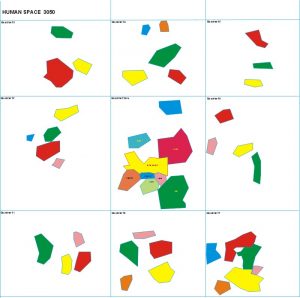 3051 First Temple of the Latter Day Mukuls opens on Takis

3070 Battle of Romulus – an Earther Punitive Expedition to a rebellious city on Romulus III – the ensuing harsh treatment of the local ‘Venerian Sympathisers’ to the growing republican movement inflamed dissent that eventually led to the creation of an independent Venerian Republic 25 years later.

3087 GFA takes control of Sumter System from the MAFC.

3098 Venerian forces suffer massive defeat at the hands of the Mald Foundation in the Battle of Doitall (Maldenite fleet turned out to be much bigger than anticipated). This was the last interpolity war in Quadrant 0. 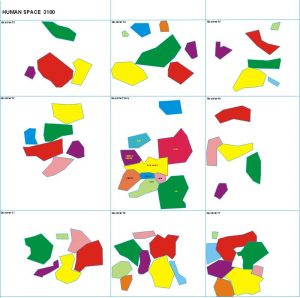 3101 Cyborg Rebellion on Samhain (Q8) – major attempt of a large group of cyborg humans to overthrow the Sirius government on that world and gain independence.  The SSR was forced to ask for assistance from the neighbouring Martians.  The rebellion was eventually squashed, and many of the insurgents were shipped out and exiled to a distant subsistence colony in another quadrant.
Colli and Gum (Q2) vote to join the Union of Xyon.

3103 Quoheleth and Hobbes (both Q1) vote to join the Union of Xyon. Samhain leaves the SSR and joins the MAFC.

3105 Punk Crisis – Earth and MAFC struggle over the Punk system in Q1. Colonial conflict between Mars and New Venus in Quadrant three leads to the transfer of G’Drog and Butler to the Republic.

3109 Redshoot and Bosrovia (Q2) leave the MAFC and join the RNV, following a minor revolt. Conflict in Q3 between Earth and Mars results in transfer of Geneva and Garesh to the Empire.

3114 Battle of Tinky (RNV Grand Armada vs GFA colonial fleet) – resulting in occupation of Organia, Pulp and Tinky by the RNV.

3137 Rebellion on Gryt crushed by SSR.

3141 First manned survey, the ESS Odyssey sets off to the centre of the galaxy, sponsored launched by the Imperial Astrographer’s Institute – a 60-year round trip.

3148 The Braveheart Crisis. Earth takes over all Wolf colonies in Q8. 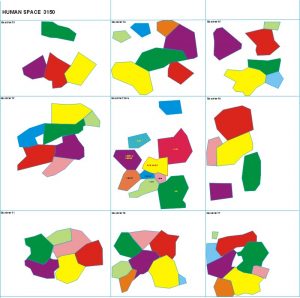 3153 The Bolton Incident – conflict between Venerian and Martian forces (Q5).

3166 Samhain votes to rejoin the SSR and leaves MAFC.

3169 GFA and Earth skirmish over access to trade with Macross (Q6).

3170 Battle of Safeway Station. Earther forces retake control of a key orbital, initially captured by ‘unofficial’ Venerian forces, at The Long End (Q1). Wolf Commonwealth had over Lin Chung (Q2) to the GFA after a ‘misunderstanding’.

3174  The Organian Atrocity – a group of rogue Venerian scientists set up a planet-wide medical/genetic experiment (the ‘Wild Card Virus’) that got out of hand and left 1.3 million dead or horribly mutated.
Wolfer King Marx I dies aged 119. King Stabilo I ascends throne.

3178 Renowned Earther physicist Nevel Kingston-Brown dies. Famous for his seminal work on the technology of the Forerunner species.

3180 The Battle of 116AL (Q7) – Earther and Sirius forces fight over enforcing an arms blockade.

3186 First data from the centre of the galaxy received from the manned probe Odyssey. Remarkable images of the Core Stars syndicated throughout human space.

3193 Garibaldi Crisis – the system changes hands from MAFC to RNV in Q3.

3196 The Battle of Paquito and the official start of the Exterminator War. Freedonian Incident – Earth forces wrest control of Freedonia from the RNV in Q1

3197 Major space battles against the Exterminators at Yendor, Trucker, French, Adobe, Doggie, Baldar, Dyme, Ultra, Dubai and Asstek.
V1, V2, Cone and Gagger (Q7) all join Union of Xyon.
Romulus (Q3) votes to join Union of Xyon after Xyonist forces conduct peacemaking operations there. This is the first colony to join the UoX in Q3.

3198 Major space battles against the Exterminators at Senta, Winky, Doggie, L’Fayet, Flypaper and Dyme. A large Exterminator base was destroyed at Granyt.
First major large find of ‘Forerunner’ artefacts discovered at TUSKAN in Q7. This find confirmed a great deal of speculation about the only sentient alien species known to have existed in the volume of space occupied by humanity.

3199 Major space battles at Begin and Peroxide. An illegal AI was destroyed on Over (Q5). 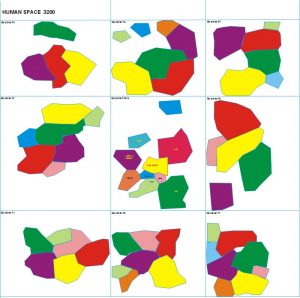 3200  Two gigantic Exterminator bases located, one in Q5 (Z’ha’Dum) and one in Q6 (Red Spot) – both bases destroyed by huge combined Human fleets.
Treaty of Old London agreed setting out the creation of a Supreme War Commander (Thai-Sho Musashi) and the commitment of fleets to a new joint command to fight the Exterminators. Battle of Tuskan where 16 ESBs were destroyed by a combined human fleet under Admiral Tryon. Existence of a forerunner AI confirmed. Forerunner AI destroyed.

3201 ESS Odyssey returned from the centre of the Galaxy. Evidence of another sentient civilisation in the Galaxy confirmed.

3202 The Avalon Incident (Q1). Holm Incident (Q1) result of a local ‘misunderstanding between an Earth/GFA Fleet and Venerian fleet.
The ULTRON-VISION Crisis – a rogue AI temporarily took control of a number of human worlds in Q3.

3204 Arrival of alien trader from another Universe at the independent world of Gorilla (Q0). Henry Pymm, designer of the Vision AI device is killed during violence at his trial on Asteel (Q0). Discovery of putative Exterminator Home Systems from analysis of Exterminator Brain units.

3205 Humanity gains evidence of the location of the original builders of the Exterminators, some 2,000 parsecs towards the Galactic centre.

3207 Amoss Crisis in Quadrant 6 starts- Earth and the SSR in conflict over colony world.

3209 Amoss Crisis ends with Earther withdrawal from the system.

3214 War between SSR and New Republic in Q7. Sirius Q0 invaded by Martian-Earther forces under terms of Stickney Treaty and AI destroyed by nuclear explosion in the Sirius capital city.