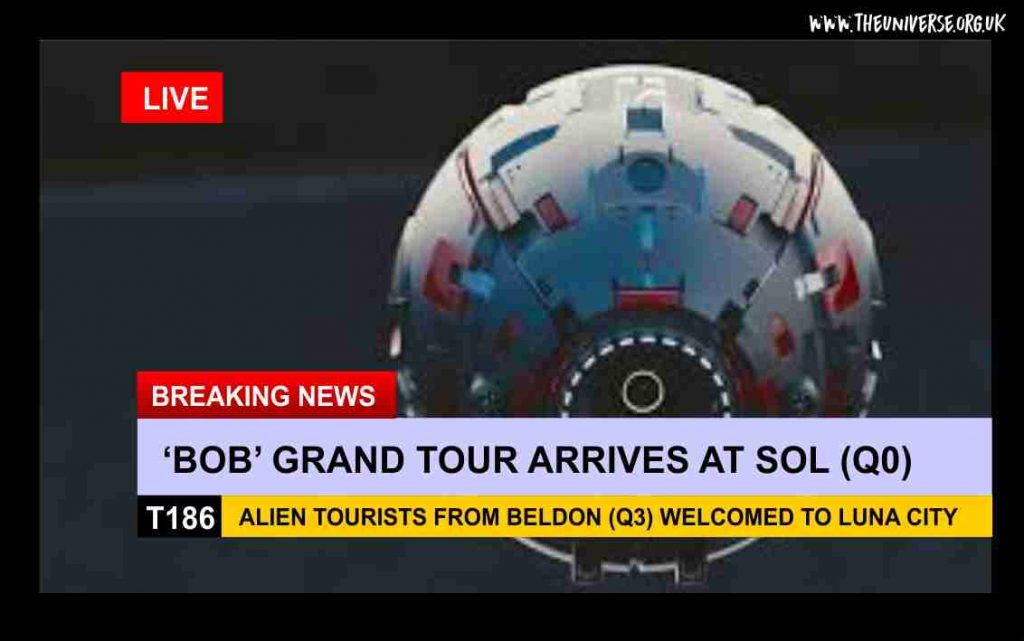 The ‘Beings of Beldon’ , aliens who arrived a few years ago and colonised Belton (Q3) acquired a hyperspace-capable passenger ship and have been conducting a tour of human space.  They arrived at Sol and were formally received by Imperial Dignitaries and the First Citizen personally spoke to them via secure vid-link.  A spokesperson for the Empire said “It is of course natural that our alien guests visit the home of humanity as the high point of their tour.  I understand they were very impressed by what they were able to see.  This is probably the last place they’ll ever need to visit.” 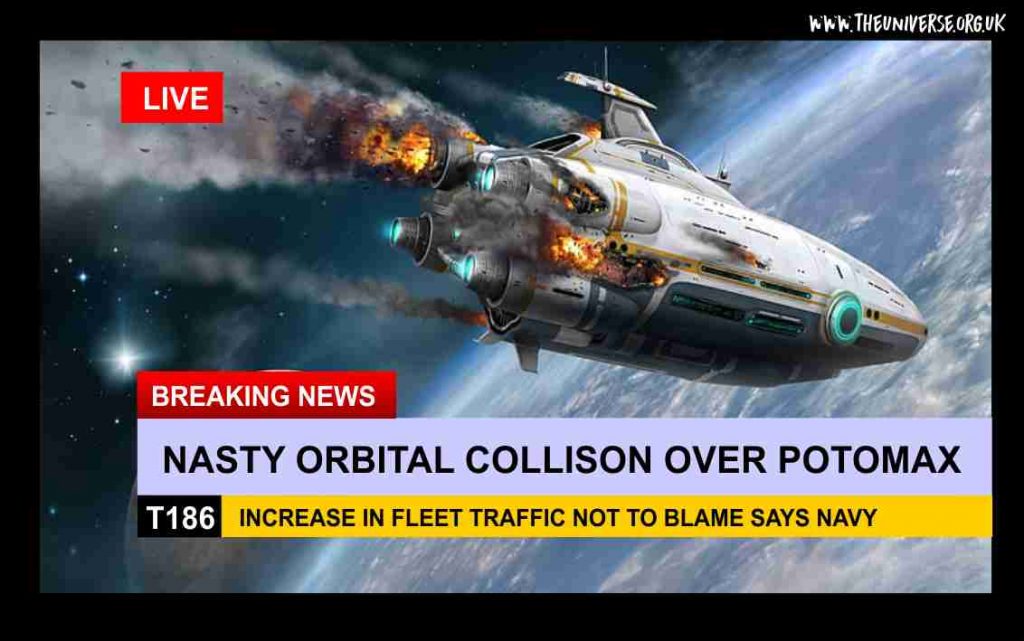 64 spacecrew were killed in a terrible orbital collision in orbit over Potomax (q7).  An investigation is ongoing as to the cause, but local space operators suggest the high levels of orbital traffic resulting the presence of three GFAN battle squadrons might be a contributory factor.  A Navy spokesperson said “The GFAN takes orbital safety and space traffic control protocols very seriously indeed, and there is no known way this could be a result of faulty fleet traffic management.  As everybody knowns nothing is better than GFA space traffic control.” 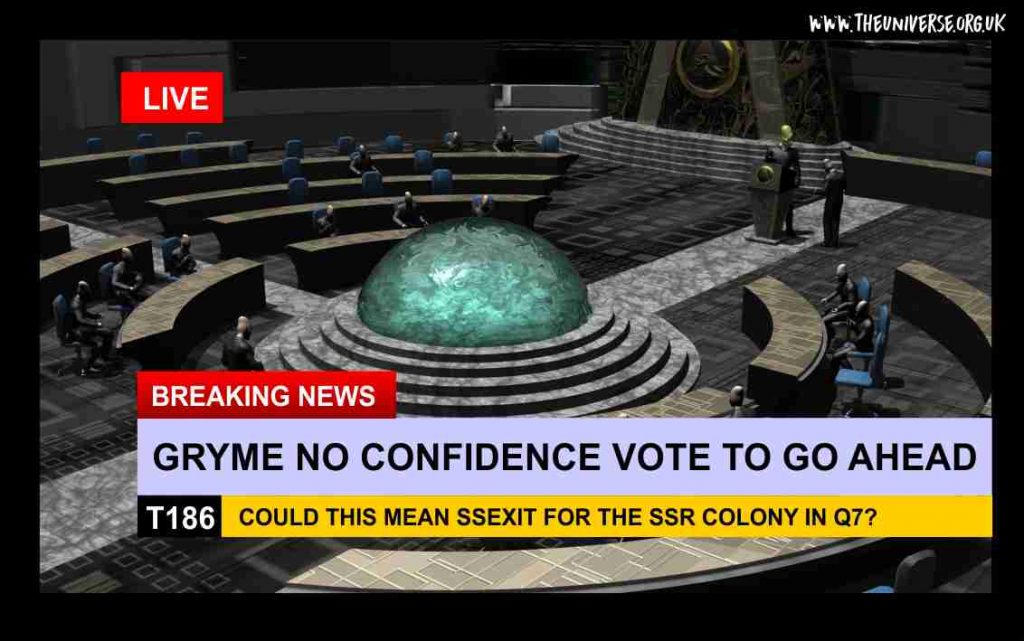 The local government on Gryme has approved a scheduled vote in the Planetary Diet.  If the no-confidence vote wins, this could pave the way to a referendum on formal secession from the Sirius Socialist Republic.

Mullah Mobeem77 has died suddenly, causing consternation and grief across his home planet of Draconis (q7).  Mobeem77 was a strident advocate for transhuman rights and spoke trenchantly on the future of the transhuman movement.  Some of his more militant supporters turned to violence and there have been widespread rumours that Mobeem77’s cerebral hemorrhage was either not the actual cause of death, or was induced by ‘THEM’.  In the jargon of his movement, THEM stands for Traitor Human Enemy Manipulators, the term being inconsistently attached to all manner of organisations such as the Earth Empire, the Gorgon colonists, the New Republican Government, LexCorp and (paradoxically) a cabal of 4m high shape changing reptiloids.  Oh yes, and grey aliens.  The local government on Draconis has mobilised additional public order police in anticipation of some disorder following the death. 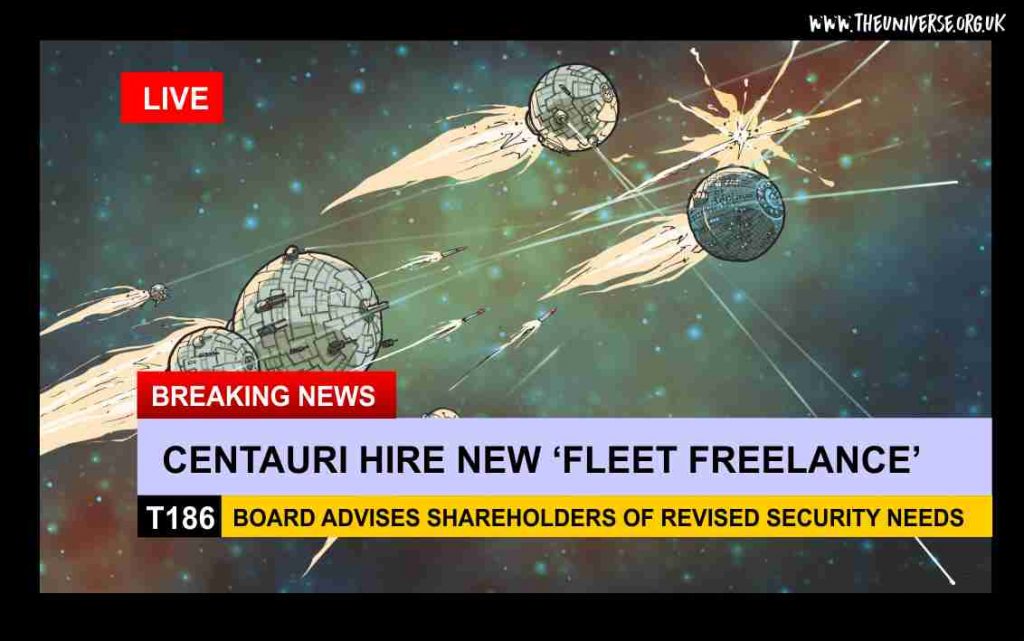 The board of the Centauri Conglomerate has announced the signature of a major contract with private military contractors to form ‘Fleet Freelance’ as a new battle squadron operating in Quadrant 7.  In a statement to shareholders, CEO Ellie Liberty said “The security situation in this Quadrant is becoming increasingly complex, and as a matter of good governance and risk mitigation, the board has decided to enhance our joint security arrangements.  Not only will the new battle squadron ensure greater trade security, but it will also reassure our partners and stakeholders that the Conglomerate means business.  Literally.” 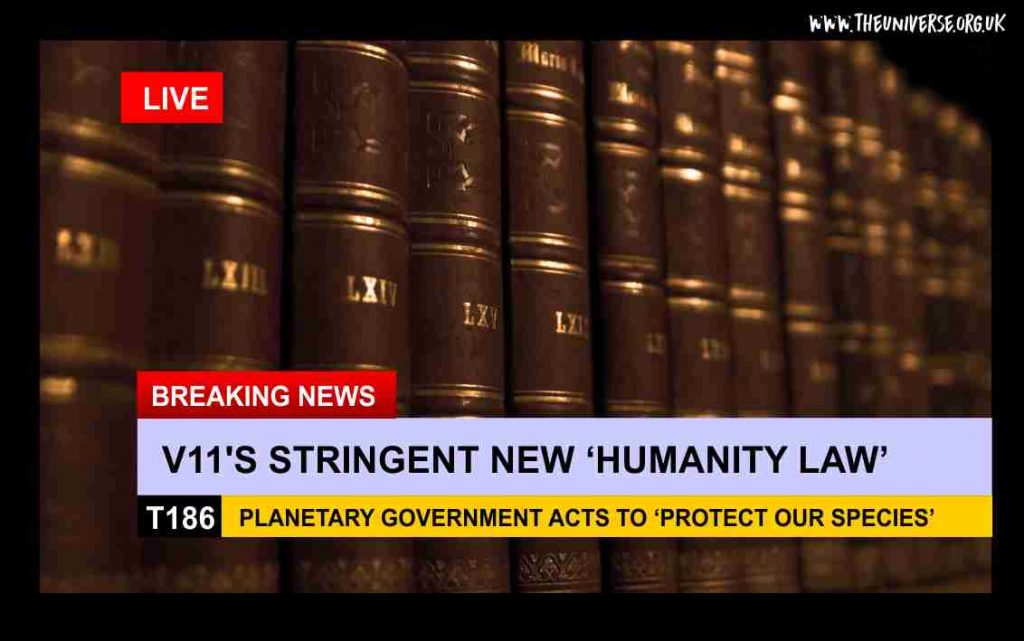 The Planetary Council of V11 has enacted stringent new laws limiting the activities and access of any ‘non-humans’ on the planet.  The new laws mandate compulsory tagging, permanent escorts and specifies that any non-humans can be arrested and summarily imprisoned for a wide range of trivial activities.  Some observers are describing this as a very hostile legal environment for non-humans, and human rights organisations in Quadrant 7 have criticised the laws.  Hermione Flowerchild from Amnesty Interstellar said “Non-humans on V11 can pretty much be thrown in prison without trial for ‘looking at me in a funny way’.  Its a blessing that there aren’t any non-humans in Quadrant 7 really.” 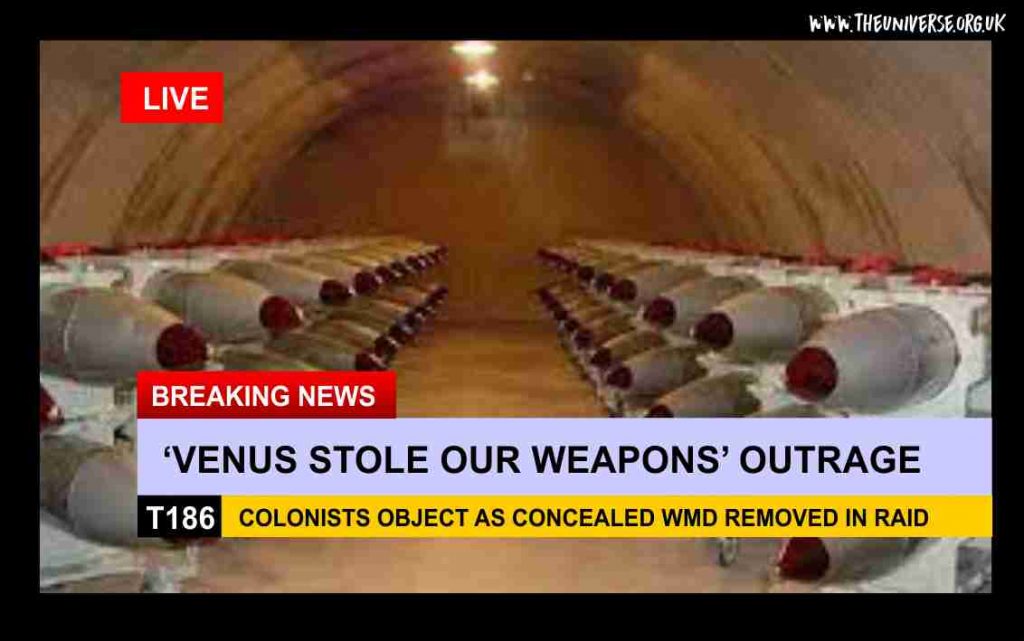 A daring raid by Venerian Starship Marines has found a previously undisclosed cache of nuclear weapons on W3 (q7).  This covert weapons store was part of the DDA’s war reserves, which due to an ‘administrative error’ was not disclosed during the recent peace talks. The DDA have formally registered a protest with the Venerian Republic and asked for their nukes back.  However there is little expectation that this will occur, as the DDA had previously agreed to dispose of all their WMD under the peace treaty.  The DDA said “We want our weapons back so that we can dispose of them properly in accordance with the treaty”.  The Venerian Navy made no comment.

Terrorist leader Agatha Von Rucksichtslos, arrested by the Venerian authorities on the independent world of W3 has been put on trial on charges of murder and attempted murder of Venerian citizens, piracy, illegal arms smuggling and resisting arrest.  Under Venerian law, if convicted, she would potentially be facing the death penalty. 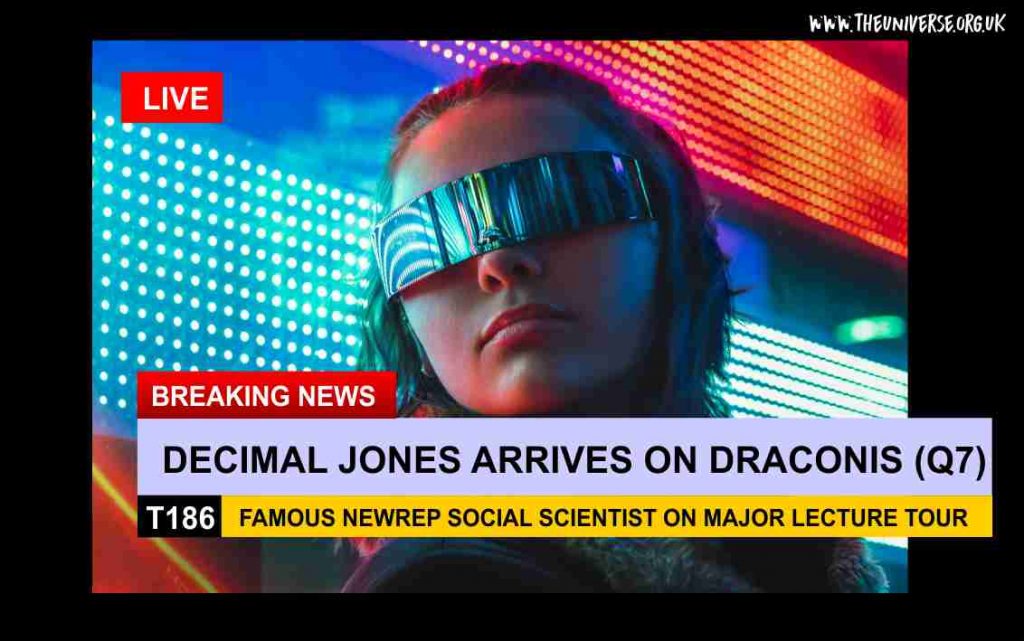 The renouned social scientist Professor Decimal Jones has arrived on Draconis (Q7) for consultation with the local government, meetings with academics at City One University, and embarking on one of her ever-popular lecture tours.  The theme of this tour is ‘Harmony & Unity – Twin Pillars of Civilisation’. 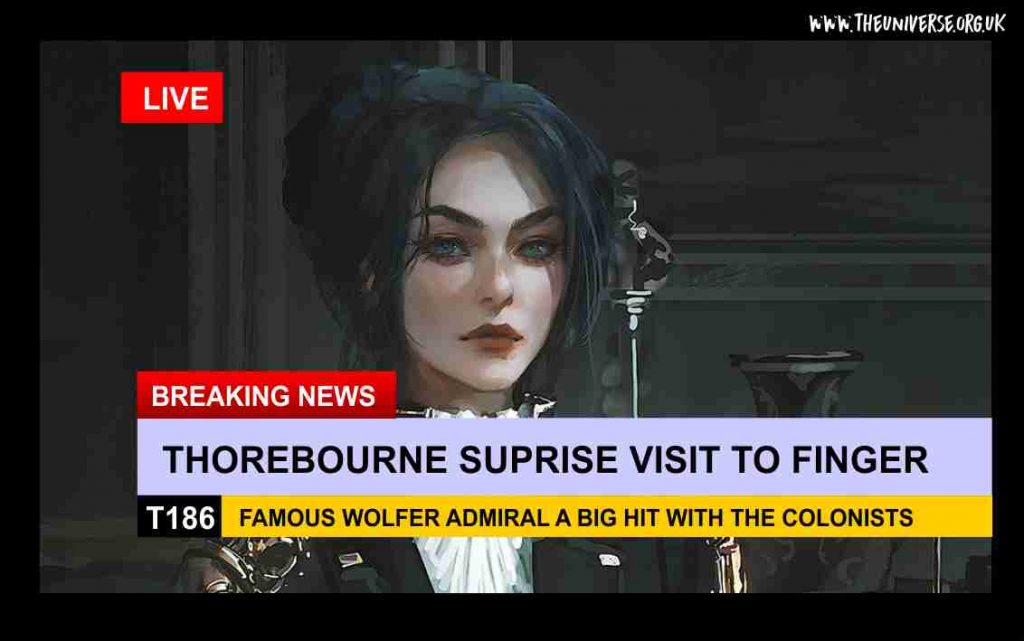 Admiral Lady Hermina Thorebourne, commander of the Royal Navy in Quadrant 7 made a surprise visit to Finger (Q7).  The colony has been going through a rough patch lately with rogue militias fighting among themselves.  Admiral Thorebourne’s visit is to inspect various Commonwealth installations, and to provide advice and support to the local planetary governor,  This is thought to be the first such visit by a senior member of the Wolfer Government.  The colonists were reportedly ‘ecstatic’ over the visit and there were widespread street parties, bunting and the Wolf flag was much in evidence.  As the Chair of the Planetary Council, Senator Fotherington-Thomas said “Well… er… the Admiral is a most… um…. imposing figure, and well… um… it was tremendously good to meet her.  She has certainly raised our morale out here on the edge of Q7.  Always been a big fan don’tya know.”

The colonists in the tiny colony known only as Colony 71 on W5 have reportedly uncovered a previously unknown Forerunner site.  They claim to have recovered ‘tonnes and tonnes’ of Forerunner Artifacts which, if genuine, will be worth a significant credit value.  Chairperson of the Colonial Board of Colony 71, Daphne Chiang said “This is brilliant!  I mean it is like finding buried treasure!  All of us here are so excited – when we sell this lot we’ll all be able to afford proper houses and build that rapid transit system we always wanted.  And some of the things we found are still working!  I mean the stuff must have been buried such a long time, I dunno maybe hundreds of years?  Anyway this is a bright new dawn for Colony 71!”