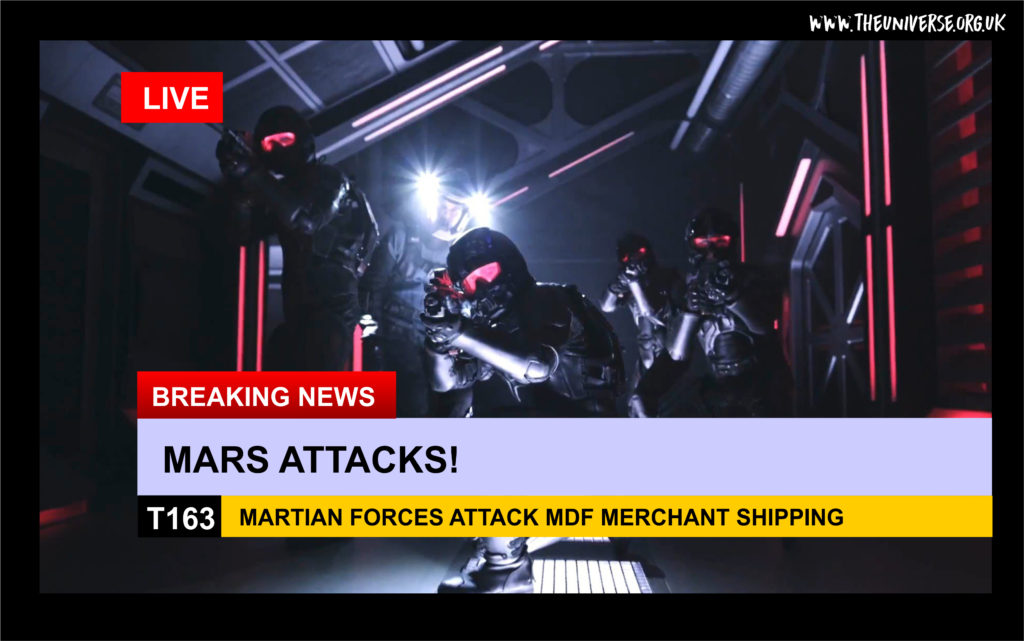 The MDF Government has claimed that one of their merchant ships was attacked an boarded by marines from a Martian warhsip in the Zubat system.  Although the attack was unsuccessful, the Maldenites are claiming it was an act of space piracy and has been demanding that the Martians punish those responsible.  Mars insists that their actions, sanctioned at the highest level, were an enforcement of the previously unenforced quarantine declared by a number of states seeking to control the movement of Zubatians off their colony world.  For many years now, Mald merchant ships have been de -facto exempt from the declared quarantine, and Mald has never recognised its legitimacy.  Why Mars should suddenly attack now, after may years of ingnoring the situation remains unclear, though observers point to the new Supreme Councillor, Senator Nonboris, who many think is acting to cement internal support and pursue his party agenda. 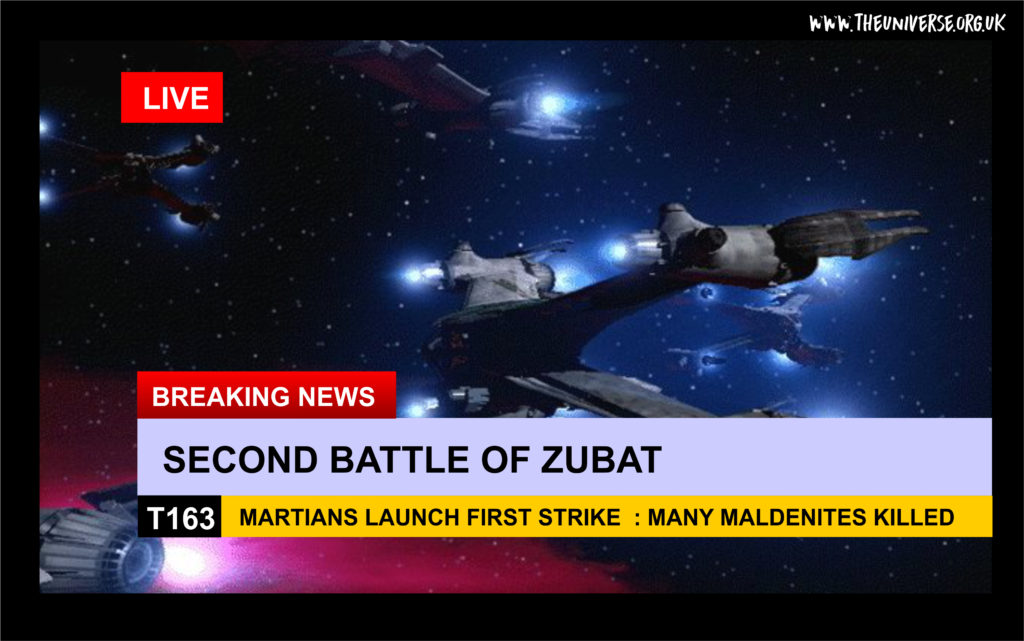 Reports are coming in of a massive space pacifier attack on the Mald Fleet in the Zubat system launched by the Martian 2nd Fleet.  Over 70 pacifiers are reported to have been involved in repeated attacks on the Mald warships, causing some damage on two of their ships and many casualties among the Mald crew.  The Mald Government has protested to the Martian authorities against this ‘unprovoked attack’ on their fleet.  The Mald Academic Council has also decleared an academic quarantine against the MAFC, in an effort to put pressure on the Martian Governent to cease its attacks.  SHortly after this action, the MDF announced that following consultation with The Chosen of Zubat, and a formal request from the Zubatian leadership, Zubat has been formally incorporated into the Foundation.  The full impact of this step has yet to be determined, as this makes the Zubatian system officially Mald space. 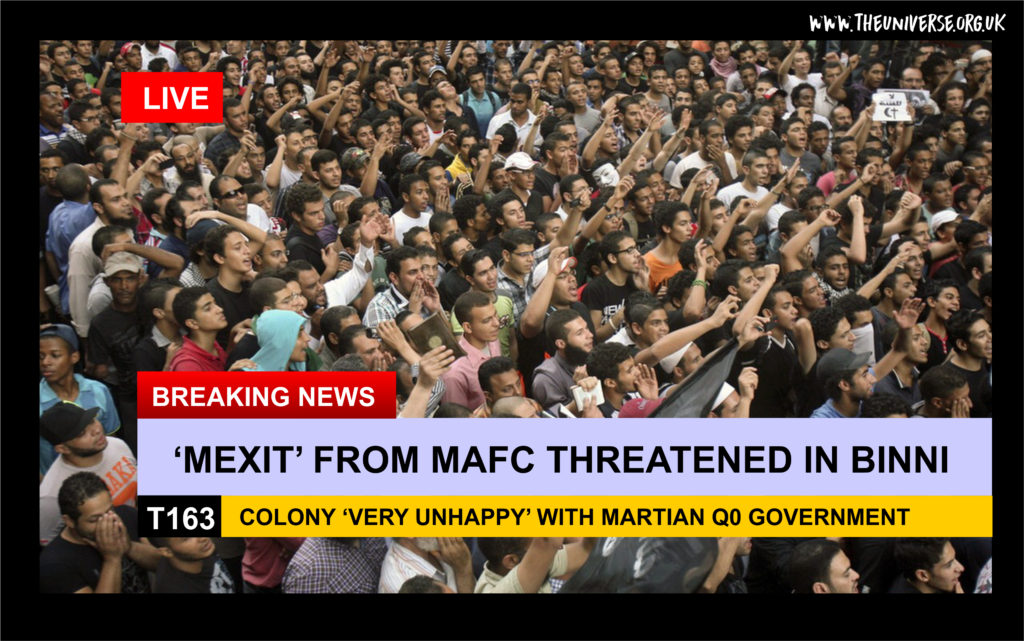 The colonial Government of Binni has started the process for leaving the MAFC followin scenes of outrage in the COuncil Chamber following the new of Mars’ actions in the Zubat system.  The COuncil Chair said “… we have had our own problems in our history, and we know about the impact of war – and we joined the MAFC because they were a force for peace and reason.  Attacks like this show us that this is no longer the Mars we know… this is not in our name…”.  The last case of a colony seceeding from the MAFC was Douglas in Q6 some years ago, and the impact of that brought down the then central government of the MAFC. 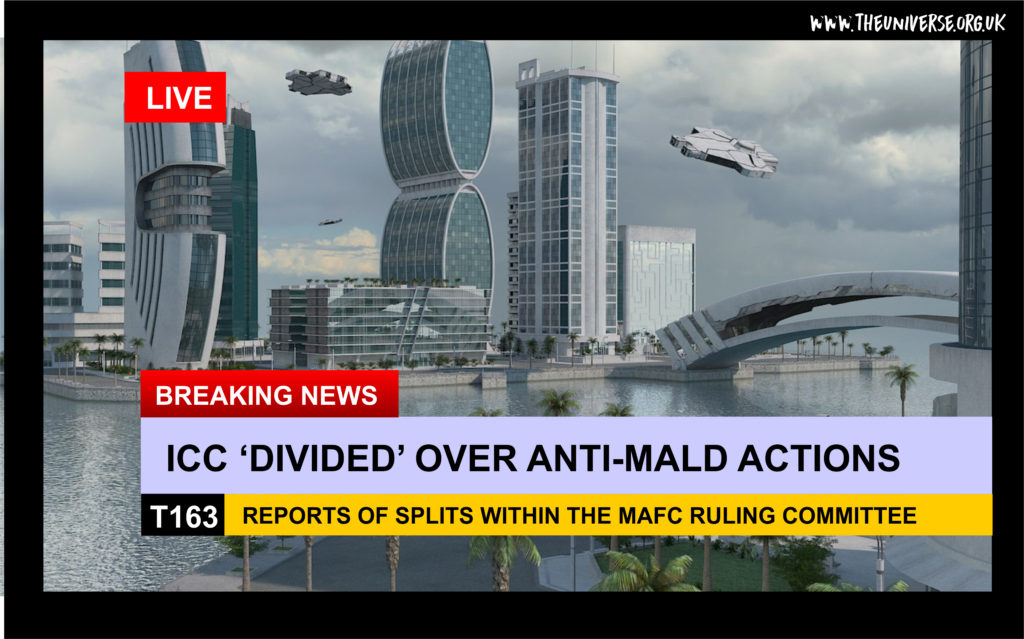 Rumours abound on New Mars among the political elites that Supreme Counciller Nonboris might have exceeded his executive powers in bringing the MAFC close to war with the MDF.  Councillors remain non-commital at this stage, but private sources suggest ‘dismay’ at the lack of consultation.  There is a major ICC meeting upcoming and we await a statement from the Council. 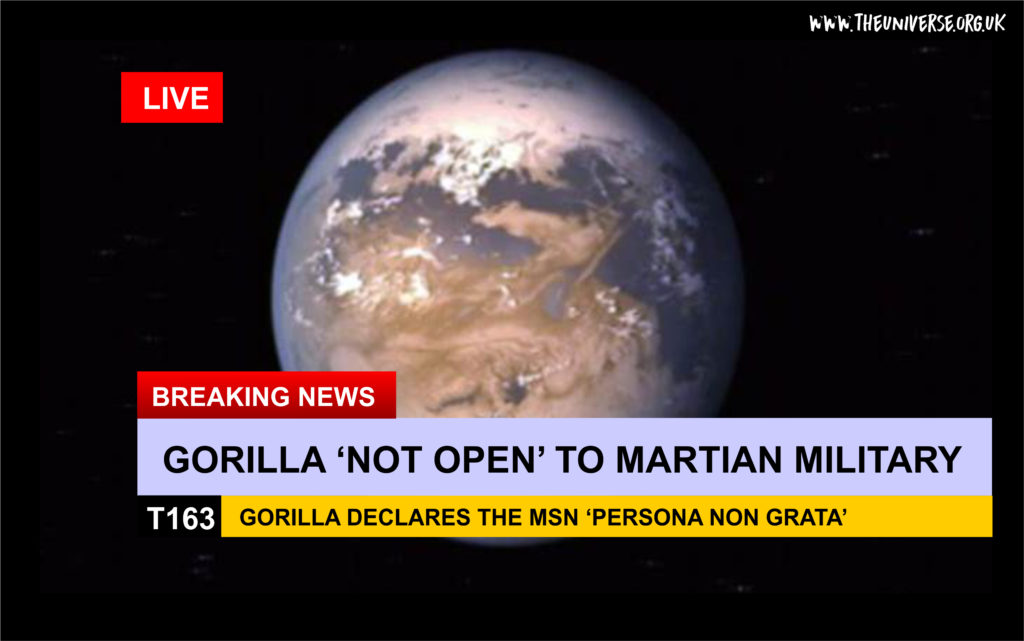 The Government of Gorilla has official declared all Martian Military starships to be off limits in the Gorilla system, and they are not permitted within the M25 limit.  In additiona, all Martian registered merchant vessels are to undergo rigourous ‘stop and search’ protocols and submit to boarding by Gorrillan Security Personel and Starguard.

The Government of Gorrillam a long-time ally of the MDF is reputed to be insensed at the recent Martian actions at Zubat – exacerbated by the Wolfer special forces raid on the planet not long ago.  Gorrilla broke off diplomatic relations with Wolf359 at that time and these have not been renewed.  All Wolfer ships have been denied access to the Gorilla system for some time now. 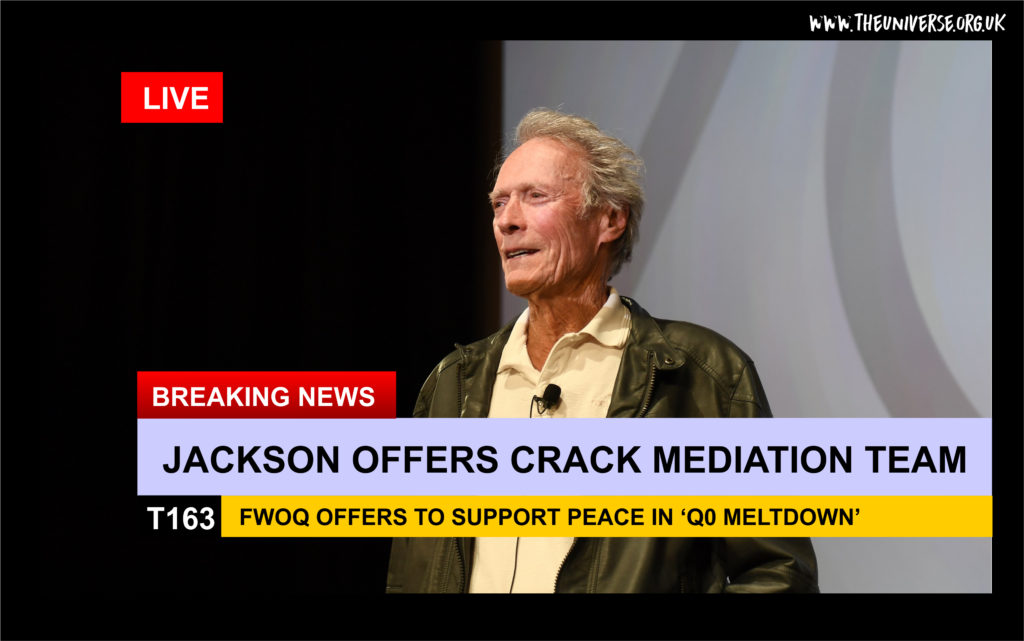 Ever popular President Jackson of the FWOQ has publiclly offered to mediate between the parties over the Zubat conflict.  This is no idle offer, Jackson’s Government has been instrumental in defusing many trouble spots in both Q1 and Q8 and many believe they could calm down the tensions in Q0 too. 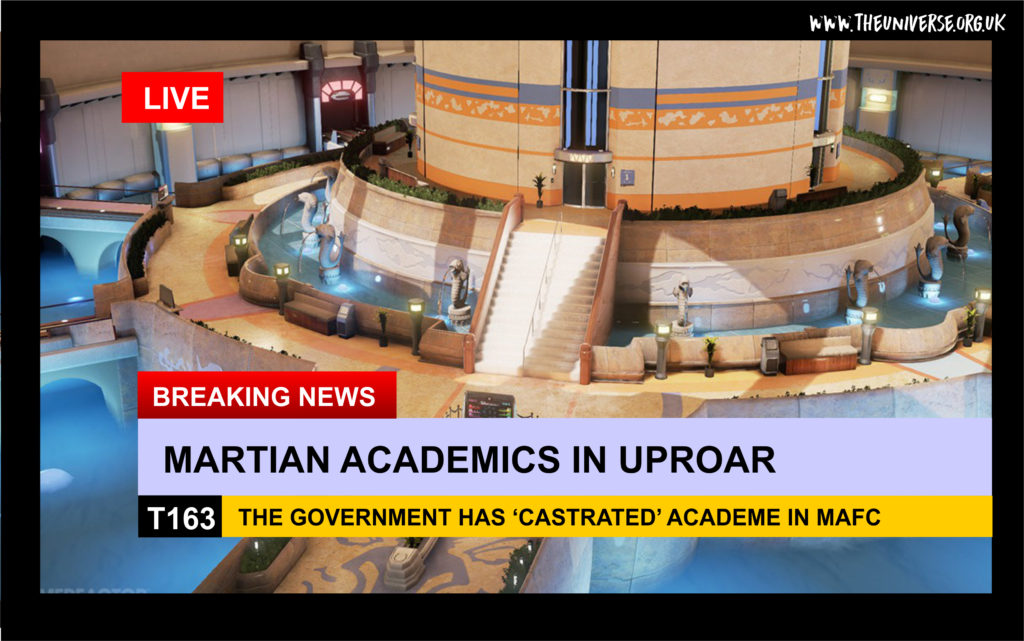 Following the announcement of an ‘academic quarantine’ of the MAFC by Mald-based funders, Martian academics have been vocally critical of the MAFC Government’s heavy-handed treatment of the MDF and the ‘entirely predictable’ consequences for the Martian academic community.  Projects have ground to a halt, and researchers have been left without income or opportunities to do their work.  A spokesperson for the New Mars Academy of Learning said “…unbelievable, that the Government should shoot itself (and us) in the foot like this.  Our programmes of work in vital areas of both military and civilian research have been crippled and it might take decades to catch up…” 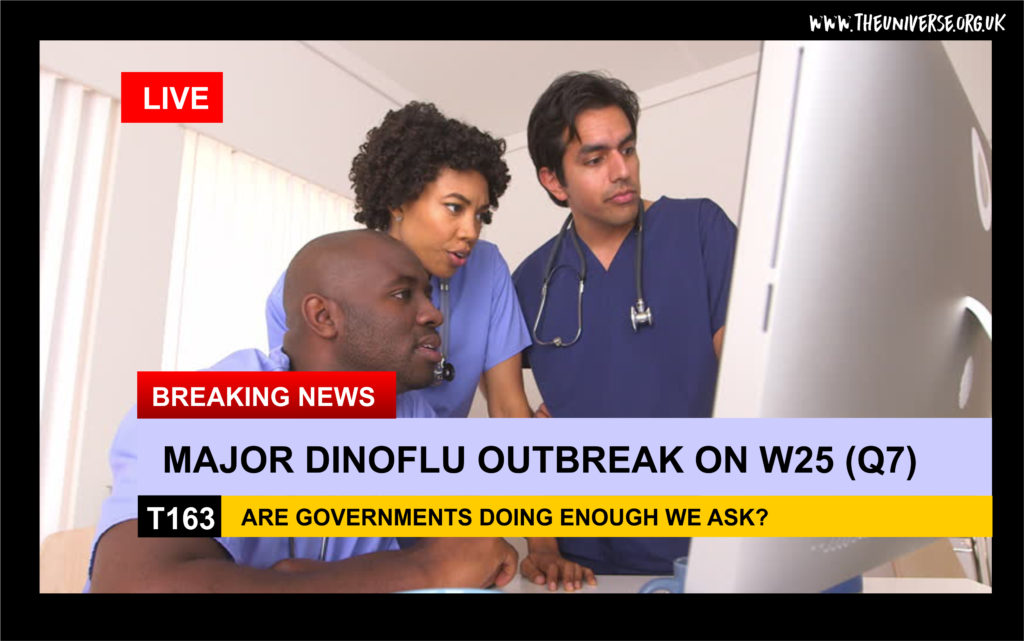 Whilst DinoFlu has been in retreat on many worlds in Q7 and Q8, it has been far from eradicated as another major outbreak has been reported on W25 in Q7.  Quarantines are in place, but for small independent worlds like this, quarantines are hard to enforce. 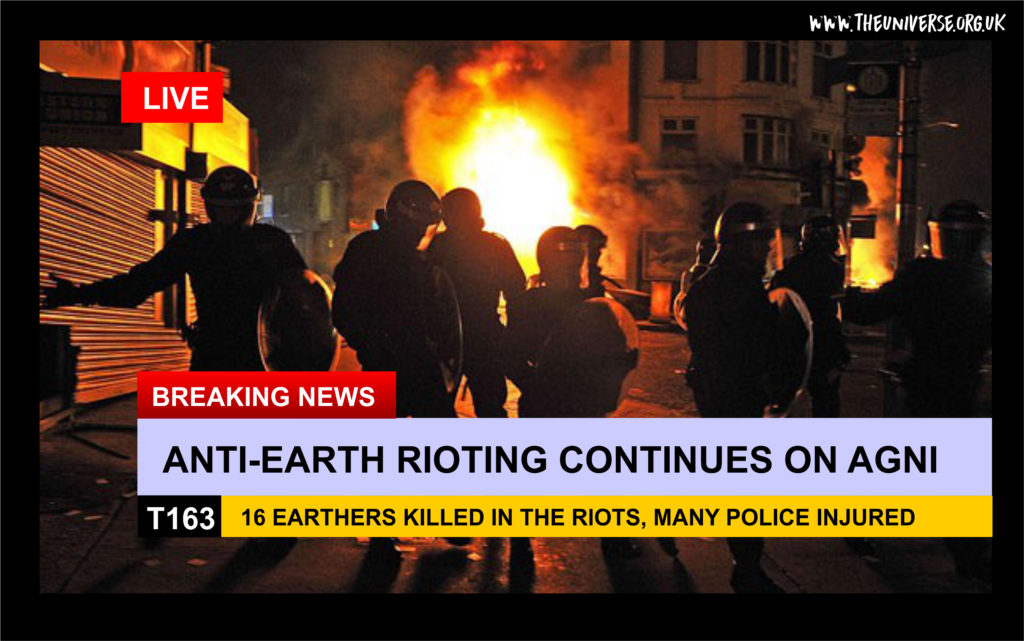 Despite major initiatives by the Kudriavy Government to calm anger on Agni, there remain strong grass-roots hatred of Earth and Earthers.  Membership of the new Agni People’s Militia has proved popular, however, and there have been long queues at recruiting offices as official struggle to keep up with the inflow of recruits. 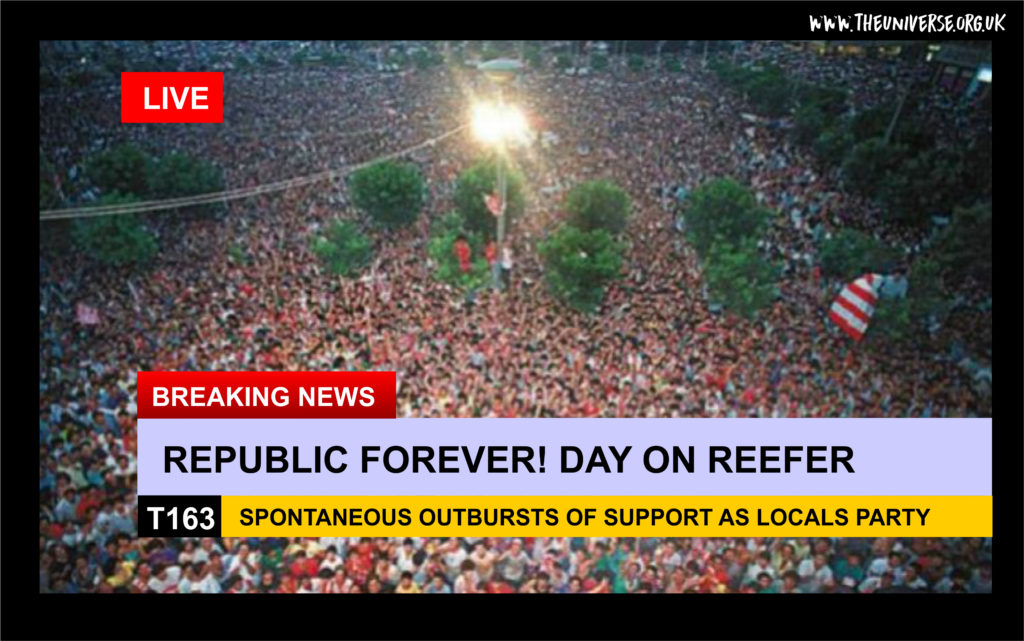 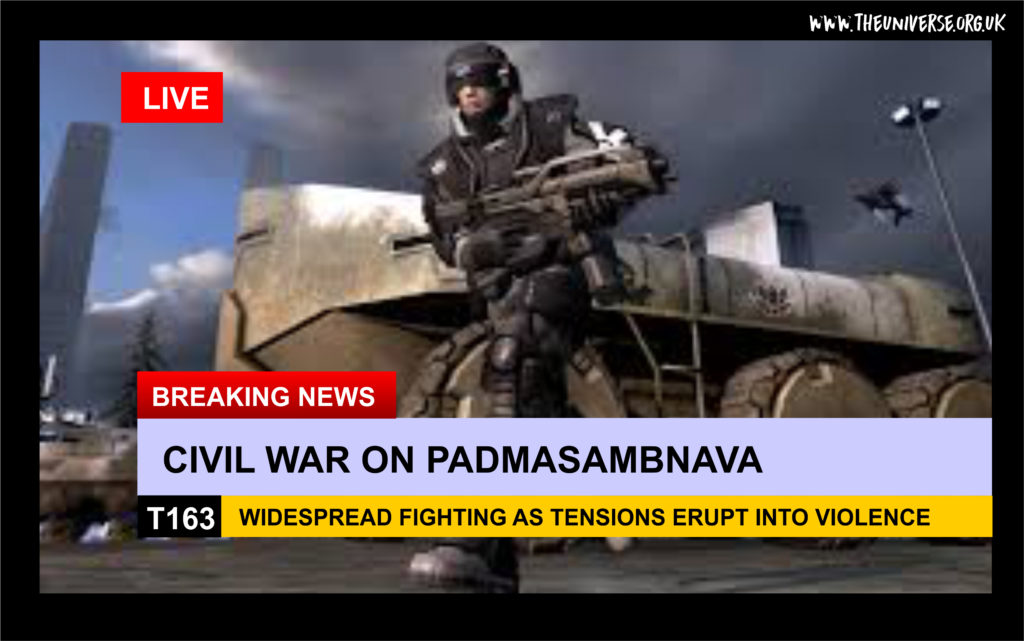 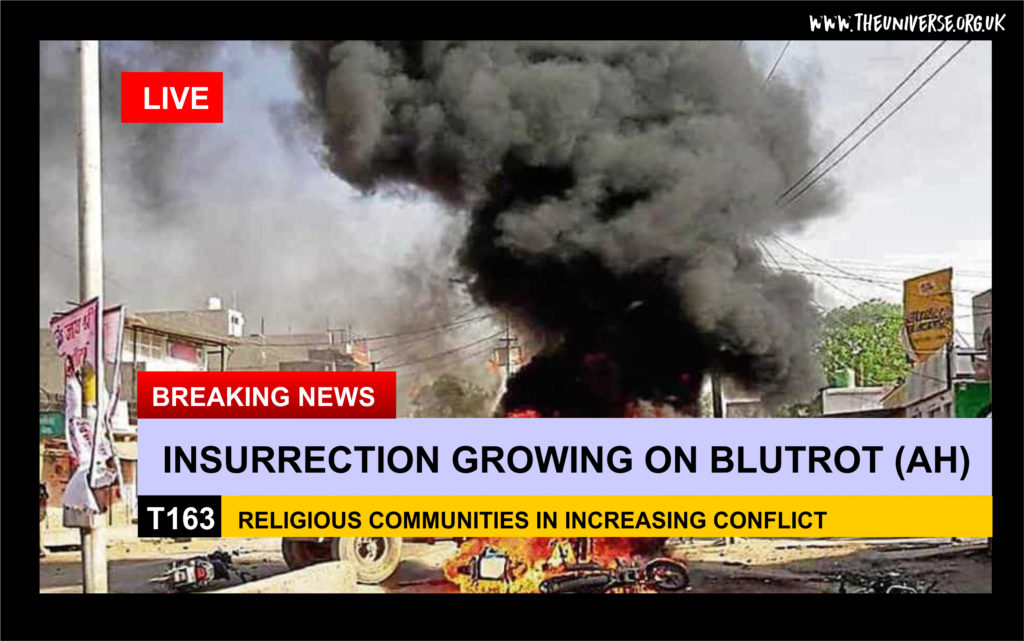